HISTORY OF ST. PAUL’S ON THE PLAINS 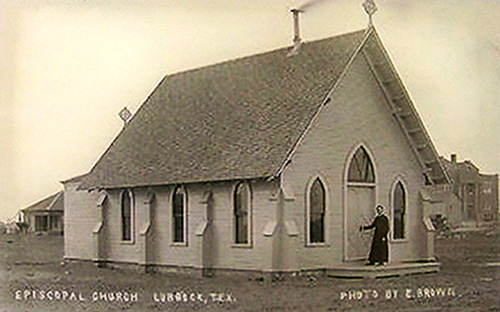 A brave and resourceful lady, Mrs. J. C. Coleman (Sallie McKee Coleman) is probably responsible for the earliest presence of the Episcopal Church in the Lubbock area. She came to the Plains with her husband and two young sons, December 23, 1889, and was likely the only Episcopalian in Lubbock County for the next fourteen years. A profoundly religious woman, she brought the Episcopal Church to Lubbock. A small Episcopal congregation, led by Sallie Coleman may have been established in Lubbock as early as 1903, probably worshipping in homes without the benefit of clergy. In 1905, Mrs. Coleman became president of a small group of Episcopal church women who met under the name of the “Guild.”

The first public Episcopal worship service in Lubbock was held at the Methodist Church in 1905. The Rev. Harry Goodman of Clarendon, Texas, conducted this first service. He made three more trips to Lubbock between 1905 and 1907. The first Episcopal confirmation of four people, was held in the Old Opera House on July 8, 1909, located in downtown Lubbock. Bishop Garrett made the trip from Dallas, traveling partly on horseback in spite of the fact that he was seventy-seven years old and in failing health. The following day he administered communion.

In 1927 the original church building was moved to 1609 Avenue Q and enlarged. In 1997 the church building, which had fallen into great disrepair and was in danger of being demolished, became the property of the City of Lubbock and was moved to a city park. It was restored through gifts to the Lubbock Heritage Society.

Currently the old St. Paul’s is used for weddings, family reunions, and other social gatherings. 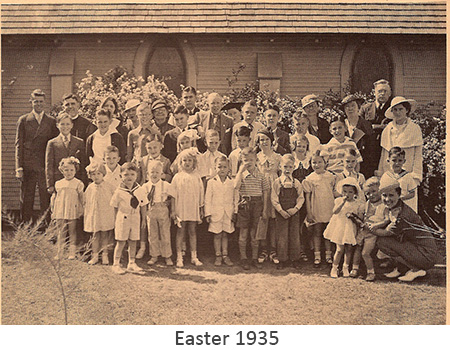 In 1939 the present property at 16th and Avenue X was purchased. The Rev. John A. Winslow and his family moved into a house at that location using it for a rectory. The congregation met in Seaman Hall, which was built in 1932 with a United Thank Offering grant. St. Paul’s Church on the Plains was designated as a parish in 1940. That same year the church property on Avenue Q was sold. The present church was completed and ready for use by Christmas, 1940.

The Rev. Claude Canterbury replaced The Rev. Mr. Winslow, serving from 1947-1955. In those post-war years the communicant strength grew, necessitating the building of a new parish hall, Sunday school rooms, a nursery, and bookstore.

The Rev. Jacquelin Washington came to St. Paul’s in 1956 as Rector. During his twenty-eight years of service a new parish hall, Sunday school rooms, a conference room, and recreational meeting room for teenagers were added. During the post-war years, St. Paul’s was instrumental in founding other Episcopal churches in Lubbock, St. Christopher’s in 1955, and St. Stephen’s in 1958.

The Rev. Harold Clinehens, Jr. came to St. Paul’s as Rector in August 1985. During his tenure he brought a new emphasis on active involvement by the laity in all facets of church life. A new emphasis on stewardship and outreach was encouraged. A major capital improvement campaign resulted in the remodeling of the office and Christian education areas. Fr. Clinehens received a call to another church and left St. Paul’s in January 1991.

The Rev. William Jarvi, who had served as Associate Rector, remained as Priest-in-Charge until the Rev. William B. Wright became Rector of St. Paul’s in August 1992. Fr. Wright continued the emphasis on stewardship. St Paul’s Playschool, which had previously been a two day a week “Mothers Day Out,” became a five-day-a-week licensed day care for children of parishioners and the community at large. An addition to the church property was the purchase of a house now called St. Paul’s House, immediately west of the church parking lot.

Fr. Wright served until March, 1998. He was followed by the Rev. Peter Fritsch. His first Sunday as Rector of St. Paul’s Church was February 9, 1999. In April 2000 St. Paul’s kicked off its three year capital funds drive, “ St. Paul’s 2000…Revitalizing our Heritage.” Over the next two years extensive repainting and remodeling took place inside upstairs rooms and the parish hall. The interior of the nave was repainted in the summer of 2003 and in September 2003 the columns were replaced. St. Paul’s parking lots were re-paved in 2005.

The Rev. Fritsch left St. Paul’s in January 2002 and the Rev. Harry Allen served as Interim Rector until the next rector was called. In September 2003 St. Paul’s Playschool closed. The campaign, “Windows of Opportunity” began in 2004. It was designed to replace decaying windows around several areas of the church facilities. The campaign was successively completed in 2005.

The Rev. Dr. Steve Sellers answered the call of the Vestry to become Rector of St. Paul’s Church and his first Sunday was August 1, 2004. With his coming there was a renewed optimism for the future. St. Paul’s experienced an upgrade in church music through a renewed connection with the Texas Tech School of Music. The Neighbor to Neighbor Thursday morning breakfast program was begun for those in the city who were in need. From a small beginning the numbers grew over time. Fr. Sellers answered the call to become Dean and Rector of Gethsemane Episcopal Cathedral in Fargo ND in 2007. He preached his last sermon at St. Paul’s on August 5, 2007 and moved away shortly after. 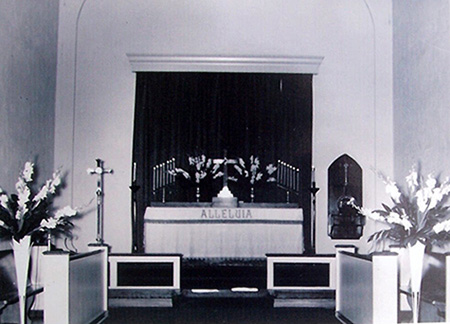 The Rev. Ryan Kuratko had returned home to Lubbock after graduation from Virginia Seminary in 2006. He was ordained to the priesthood at St. Paul’s Church on July 22, 2006 and joined the church staff as Associate Rector. In 2007 he married the Rev. Lauren Browder, who had been appointed Chaplain of Canterbury House the year before and who was on hand during the complete renovation of old building, constructed in 1932. When the Rev. Sellers left St. Paul’s in 2007, Ryan was given the title, Priest in Charge of St. Paul’s Church. For someone so young and recently out of seminary, he amazed many with his maturity and depth of knowledge and tradition. When Lauren was called as Assistant Rector of Grace and Holy Trinity in Richmond, VA, Ryan followed her to Virginia, where he became a priest in the Diocese of Virginia.

St. Paul’s called the Rev. James P. Haney V home to Lubbock in 2008. His first Sunday at St. Paul’s was August 17, 2008. The service of his installation was held on September 13, 2008. Fr. Jim was the son of the Rev. James P. Haney IV, retired Rector of St. Christopher’s Church, Lubbock and the nephew, grandson and great-grandson of Episcopal priests. Jim and his wife, Renee, both attended Lubbock schools and were high school sweethearts. Jim also attended Texas Tech and received his BS in Chemistry there in 1985.

St. Paul’s on the Plains Episcopal Church made note of its 100th Anniversary with a year-long celebration, beginning in May 2010. Two special services kicked it off. On May 9th Fr. Jim celebrated Holy Communion from the 1892 Book of Common Prayer in a manner as similar as possible to 1910. On Sunday, May 16, 2010, the three Episcopal Churches of Lubbock, St. Stephens, St. Christopher’s and St. Paul’s came together for an outdoor service in and around Lubbock’s St. Paul’s Historic Church in Clapp Park. The Rev. Canon David Veal and St. Paul’s former rector, the Rev. Bill Wright joined Fr. Jim in conducting the service. The noteworthy event received nice publicity on television and on the front page of the newspaper, the Lubbock Avalanche Journal. A centennial history of St. Paul’s, Rodney Goebel’s book, A Look Back in Time, was also published.

In February 2014,Jim passed a milestone becoming the longest serving rector of St. Paul’s in the post-Jack Washington era.

St. Paul’s on the Plain’s Historic Church is located at The Lubbock Arboretum/Lubbock Garden and Arts Center at 40th and University, Lubbock, Texas.